About our Music Faculty 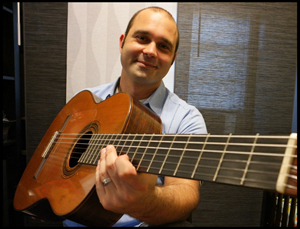 Scott Wolf is the newest addition to the full-time Music faculty at Oxnard College. Whether it be performing, teaching, arranging, or his highly acclaimed podcast, All Strings Considered, Wolf is known for his dedication to expanding the audience for classical and Spanish music. Prior to his appointment at Oxnard College, Wolf taught courses in general music, music theory, performance practice, various styles of guitar, and Latin music as adjunct faculty at Whittier College, Palomar College, Orange Coast College, and as a teaching assistant at USC and the New England Conservatory.

Wolf earned his doctorate in classical guitar studying with Scott Tennant at the University of Southern California, where he also specialized in Musicology, Flamenco Performance (with Adam del Monte), and Music Recording. Before his move to Los Angeles, Wolf received his master’s degree with Eliot Fisk at the New England Conservatory, and a bachelor’s degree studying with Randy Pile at U.C. San Diego. All three of Wolf's degrees were awarded with academic honors.

A flamenco aficionado, Wolf began studying flamenco guitar while living in Spain in 2003-04, and has continued his flamenco studies in the U.S. with Grisha Goryachev, Adam Del Monte, Juanito Pascual, and Kai Narezo. Over the last several years, the Loyola Marymount Guitar Festival, the GFA Symposium in Los Angeles, and the University of Southern California have invited Wolf to give his sought-after “Flamenco for Classical Guitarists” workshops, and Scott Tennant and Adam Del Monte frequently invite him as a guest instructor for their private studios at USC.

A dedicated performing artist and chamber musician, Wolf plays a variety of musical styles and is a seasoned performer, having performed many times here in the U.S. as well as in Japan and Spain. Most recently, Wolf performed with Susan Egan and Dr. Steve Cook at the Huntington Library, as a guest performer for Dr. Alexander Dunn's Turina lecture at the 2014 Guitar Foundation of America, and he regularly joins Janelle DeStefano and Wendy Castellanos in their music, dance, and song collaborations. Recently, Wolf was a featured soloist with the La Jolla Symphony and Chorus in Golijov’s Oceana, and played mandolin in UC San Diego’s New Music Palimpsest playing Carter’s Liumen, and was asked to join Martha Masters and Kai Narezo in playing for the Loyola Marymount president's inauguration.

Wolf is avid arranger of solo and chamber music; his work can be heard performed by such notable groups as the Grammy Winning L.A.G.Q., the USC Guitar Ensembles, and the Whittier Guitar Ensemble. His arrangements can be found from Les Productions d’OZ, Seconda Prattica, and others, and links to all of these and his recordings can be found on his website: 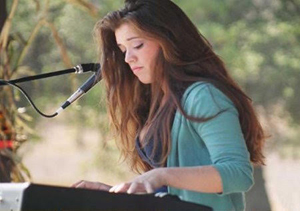 Marci Katznelson earned her Master of Music in Commercial Music with an emphasis in Composition and Arranging from California State University, Los Angeles.  She is also a graduate of the University of California, Los Angeles with a Bachelor of Arts in Ethnomusicology.  Additionally, she is a Pro Tools Certified Operator in Music and Post Production as well as an active member of the Avid Certified Instructor community.

Beyond her academic accomplishments, Katznelson is a multi-award winning singer-songwriter. Classically trained, she grew up on rock n’ roll and with a love for all styles and genres of music, including rock, pop, folk, country, R&B, blues and jazz, among others.  She has numerous projects to her credit as vocalist, songwriter, pianist, percussionist and producer, including solo albums, EPs, guest appearances and worldwide performances.  She has worked with jazz and rock greats such as Kenny Burrell, Freddy “Boom Boom” Cannon, as well as bassist Shawn Davis (Nikka Costa, Beck, Juanes).  She is currently collaborating with composer and arranger Daniel Gotz (Million Dollar Listing NY, LA, SF, Miami) on another studio album project.

As a composer, Katznelson has industry experience scoring music for film (The God Complex, Alien Conspiracy, Getaway, We Stand Accused) and previously served as part of the AMCL’s organizing campaign in an effort to raise awareness and facilitate the unionization of media composers and lyricists.  Katznelson also enjoys composing music for television commercials as well as performing as a session vocalist – most recently, she was featured on a series of Ford Ranger commercial spots.

In addition to Oxnard College, Katznelson has served as Associate/Adjunct Faculty and Lecturer in the Music, Commercial Music, Audio Technology and Applied Technology Departments at the University of La Verne, California State Polytechnic University, Pomona; California State University, Los Angeles; El Camino College, Rio Hondo College, Riverside City College and Mt. San Jacinto College.  It is her absolute pleasure to share her expertise and passion for music with the students of Oxnard College.  As music is both her life and her livelihood, Marci Katznelson will tell you, "life without music would be a mistake" (Friedrich Nietzsche). 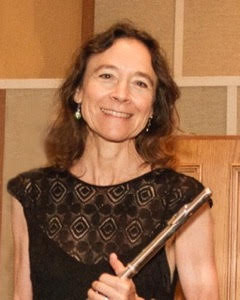 Mariana Smith began her flute studies in California with Burnett Atkinson, Damian Bursill-Hall and Ann Diener-Zentner. She is a UCSD music graduate. At Edinburgh University, Scotland she studied with David Nicholson and continued her flute studies with Trevor Wye at the Guildhall School of Music and Drama, London. Later, as a postgraduate student, she received an Artist Diploma from the Musikhochschule Stuttgart, Germany, while studying with Klaus Schochov.

Mariana has performed all genres of music in various combinations from soloist to orchestral performer throughout Europe. After over 20 years in Europe she returned to California in 1998 and has been on the music faculty of Ventura College since her return. As music director of both the Ventura Chamber Music Series and Santa Paula Concert series, she organized over 70 concerts. She is principal flutist with the Channel Islands Chamber Orchestra, has an active music studio and continues to work as a freelance flutist, pianist and organist in both California and Britain. She is a member of the MTAC and the AGO. 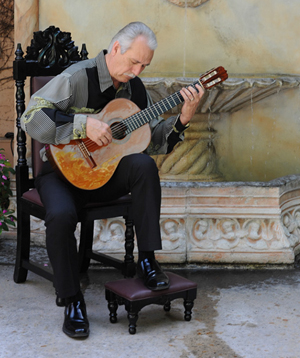 Carlos Gonzales began his interest in the guitar at an early age, but it wasn't until his last year in high school that Carlos was able to learn to read standard music notation, which gave Carlos a new perspective on how to learn music. Shortly after high school Carlos began studying with Celedonio Romero. During the next two years Carlos was introduced to formal hand techniques and standard repertoire. Carlos applied himself with discipline and enthusiasm; in a short time he developed fine technique. Upon the recommendation of his teacher Celedonio Romero, Carlos decided to study with Vicente Gómez. Wanting to deepen his love for the classical guitar, Carlos then decided to attend the California Institute of the Arts in Valencia, CA where he studied with Stewart Fox. He graduated in 1978 with a Bachelor in the Fine Arts and Guitar Performance.  In 1980, Carlos began a Master's program at California State University at Northridge. Carlos studied guitar with Ronald Purcell. During his studies there he had the opportunity to attend master classes with Andrés Segovia, Julian Bream, Carlos Barbosa Lima, Alexander Lagoya and John Mills. In 1981 Carlos began teaching classes at Ventura College. Carlos has continued teaching music at Ventura, Oxnard, and Thomas Aquinas Colleges.

In 1998 Carlos helped establish and develop the now recognized Ventura County Classical Guitar Society. The guitar society has grown from a small group of students to hundreds of guitar aficionados, aspiring musicians, and professional performers. Today, Carlos remains active in the West Coast as a concert guitarist and teacher.